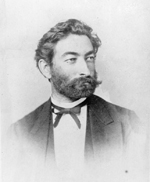 German zoologist known for his research on invertebrates and apes and the scientific expeditions he organized to Southeast Asia and South America. In 1877 he undertook an expedition to Brazil. From 1892 he led an expedition that lasted two years to Southeast Asia, it visited Ceylon, the Dutch East Indies, Japan, China and Australia. Among the participants was his second wife, the zoologist and feminist Margarethe Selenka (1860-1922), with whom he was married in 1893. When Selenka became severely ill during his stay in the Dutch East Indies and had to return to Germany, his wife continued exploring the jungles of Borneo by herself. The couple wrote a report of their journeys together, titled Sonnige Welten- Ostasiatische Reiseskizzen. He died on 20 February 1902 in Munich, aged 59.