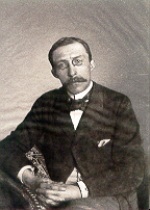 French poet and writer of the Symbolist school, whose poems were strongly influenced by those of Baudelaire and noted for their somewhat morbid and elegiac tone. He also was influenced by Verlaine; his works disclose a taste for indecisive, vague imagery. Samain helped found the Mercure de France, and also worked on the Revue des Deux Mondes.