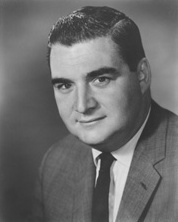 American journalist who first came to prominence in the early 1960s as a journalistic investigator. Fluent in French, Salinger had a wide-ranging career that spanned the Atlantic, and he made powerful contacts around the world. He was considered a shrewd organizer as well as bon vivant. Over the course of his career, he worked as a political speechwriter, business executive, magazine columnist and co-authored "A Tribute to JFK" with Sandor Vanocur.

His father was a Jewish mining engineer of German descent, and his mother was a French Catholic. A very bright child prodigy with a tested IQ of 140, Salinger began playing the piano when he was only three or four years old. With the Wall Street crash of 1929, his father lost his job, and his family moved to Toronto, Canada where his parents enrolled him in the Toronto Music Conservatory. Beginning at age six, he played concerts until he was 12 years old. Because music consumed his life, with six to eight hours of practice every day, his parents felt he was too isolated from ‘real life’ and that he needed to have some friends. They had the boy stop playing for a year, and he never returned to music other than as a hobby. His family eventually moved back to San Francisco where he attended Lowell High School. After graduating at age 16, he enrolled in San Francisco State, but with the onset of World War II, he joined the U.S. Navy. Within a year, in 1942, he served as a commanding officer on a ship in the Pacific. After the war, he returned to college at the University of San Francisco, and while attending classes, worked at the San Francisco Chronicle.

Leaving the Chronicle in 1954, he soon went to work at Collier’s magazine. When Collier’s went out of business, he went to work for Bobby Kennedy, and in September 1959, became press secretary for Senator John Kennedy. He served as director of media operations during the 1960 presidential campaign, and when Kennedy became President of the United States, Salinger went along as his presidential press secretary. After Kennedy’s assassination in 1963, Lyndon Johnson asked him to remain on staff; initially he did, but unhappy with events in Washington, he eventually left and decided to run for senator of California. He defeated his opponent in the Democratic Primary, but before the general election could be held, he was appointed to fill an open Senate seat, and thus on 6/02/1964, he became the U.S. senator from California, a position he held for five months. In an interesting twist, when the general election was held, Salinger lost.

In 1965, he joined Continental Airlines. He was hired to take over operations of Continental Air Services in Laos in a move that was planned by the CIA as a way to replace Air America in their covert operations during the Vietnam War.

His association with the Kennedy family continued. Instrumental in arranging the speech that Robert Kennedy gave just prior to his assassination, Salinger was nearby at the time Kennedy was fatally wounded. He was an award-winning reporter for ABC News in 1978 and in 1979, as Bureau Chief of ABC News in Paris, he had a hand in negotiations during the Iranian hostage crisis. He went on to become vice-chairman of Burson-Marsteller, a PR firm in Washington, D.C., and later became Chief Foreign Correspondent in 1983.

In February 2001, with George W. Bush in the White House, Salinger said he was going to return to France and spend the remainder of his life because he didn’t want any more "Bush presidents."

Salinger is an admitted philanderer who states that from the early 1950s until 1983, he had many mistresses, some of whom were married to famous men. He is known for his trademark cigar and rotund stature. He was married four times. His third wife was French, and they lived with their three children in Paris. In 1977, his life was greatly affected by the grief of his son Marc's suicide. He met his fourth wife, Nicole (known as Poppy) in 1983, and he says that he gave up all his mistresses at that time due to his great love for her. Nicole operates a bed-and-breakfast in Le Thor, France.

B.C. in hand from the Wilsons