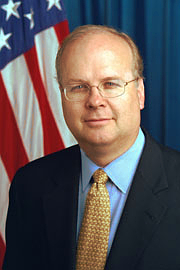 American political strategist and presidential advisor, credited with being the mastermind behind the making of George W. Bush into a politician, first as Governor of Texas and then US President. Rove's strategy has been to play to the conservative wing of the Republican Party, particularly the social conservatives, enlisting the help of the Christian evangelicals and other right wing conservatives.

Early on in his life, Rove became a Republican, at age 9 deciding that Richard Nixon was his candidate of choice in Nixon's race against John F. Kennedy.

Under the tutelage of the late Lee Atwater, Rove became Chairman of the College Republicans in the early 1970s when George Herbert Walker Bush was Chairman of the Republican Party. Rove learned first hand from the attack-dog tactics Atwater was famous for employing. In 1980, the first President Bush employed Rove in his political campaign; Atwater was at the time Chairman of the Republican Party. When Reagan was elected in 1980 and the senior George Bush was his Vice President, Rove began his consulting firm. Rove's first direct-mail client was elected the first Republican Governor of Texas in 100 years. During the 1980s, Rove helped many conservatives get elected to office. In 1993 he was the brain behind getting George W. Bush elected to the office of Governor of Texas. Within a 10-year period, Rove masterminded the switch of Texas from a Democratic stronghold to a Republican-held state.

Rove has no college degree but has been called brilliantly shrewd in his ability to grasp and plot a winning political strategy, and to anticipate opponents' moves (one operative called him the Bobby Fischer of politics).

George W. Bush openly credits Rove with his two elections to the office of President in 2000 and in 2004, however controversial those elections were. Since Bush was elected the first time, Rove has been a close advisor to Bush. On February 8, 2005, Bush appointed Rove deputy chief of staff in charge of policy.

Rove's early life was marked by his family's moving to Salt Lake City where he attended high school and became active in politics. He dropped out of the University of Utah and never completed his college education. The second of five children, his parents' marriage ended in a 1969 divorce. According to a story in the New Yorker by Nicholas Lemann, Rove soon after discovered that his mother's husband was not his or his older sibling's biological father though he admires his adoptive father immensely. Rove's mother committed suicide in Reno, NV in 1981.

Rove has married twice, first for a short time to Valerie Wainright and second, in 1986, to his current wife Darby with whom he has a son, Andrew Madison Rove, named after James Madison, whom Rove greatly admires.

Rove has been likened to Machiavelli in his political maneuverings. He has been called The Architect and Bush's Brain. Bush himself has referred to Rove as "The Boy Genius" and "Turd Blossom."

By mid-2005, Rove was named in the press as the person or one of the people who leaked the name of a CIA undercover operative to the news media, allegedly in retaliation of her husband's criticism of the Bush administration's policy toward Iraq. The leak occurred in August 2003 and has been under investigation since then.

On August 13, 2007 he announced his resignation, effective August 31, 2007, from his position as Deputy Chief of Staff to President George W. Bush. Rove cited his family as the reason, saying he wanted to spend more time with his wife and son in Texas.

His memoir was released on March 2, 2010. The book is entitled, “Courage and Consequence: My Life as a Conservative in the Fight”

PT quotes media sources for date and place, no time