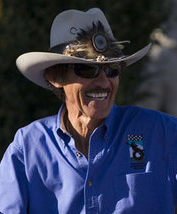 American race-car champion, a famous driver considered "The King" because of winning over 200 races and setting a record he shared with only one other driver of seven Winston Cup titles.

The son of Lee Petty, a champion stock car racer, Richard drove his first race at age 21. He decided then that that was what he wanted to do. He was a legend long before he blasted to his record 200th NASCAR win in 1984. Racing cost him two dozen broken bones and made him 75 percent deaf, even though he walked away from a February 1988 crash at Daytona International Speedway in which his car, with him inside it, flipped seven times. He decided to retire at age 55.

He married his high school sweetheart, Lynda, and they have a son and three daughters. They reside in Level Cross, North Carolina. His son Kyle carries on the family tradition of being a racing driver in the Winston Cup series and grandson, Adam, made his debut in a Winston Cup car in March 2000.

During the 1998-99 season both Richard and Lee owned cars and sponsored teams and Kyle was driving a Winston Cup series car and his grandson, Adam was enjoying his rookie year season in the Busch series. Richard's interests have also expanded into owning race driving schools for professional and non-professional drivers.

June 1999 found Petty in the Greensboro, N.C. hospital with bleeding ulcers. He was treated and released.

On 4/05/2000, Richard's father, Lee Petty, the patriarch of the racing dynasty, died in Greensboro, N.C. weeks after undergoing surgery for a stomach aneurysm. An all too short four weeks after his fathers death, his grandson Adam was killed in a Busch series qualifying run at the Loudon, NH track, 5/12/2000 at the age of 19, extinguishing a promising career and the fourth generation of racing for this family.

B.C. in hand from Stephen Przybylowski