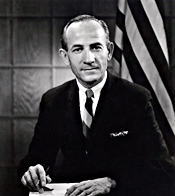 He served in the United States Army Air Forces during World War II and was a pilot for United Airlines. He was a Seventh-day Adventist.

Pettis was killed on 14 February 1975, when the Beechcraft Model V35B Bonanza he was piloting crashed near Cherry Valley, California, after he encountered adverse weather conditions. His wife, Shirley Neil Pettis, replaced him in the House when she won a special election on 29 April 1975.