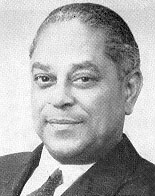 The grandson of a slave, he grew up in French Guiana and went to Toulouse to complete his studies. A brilliant student, he became a lawyer in 1918 and worked with César Campinchi, a lawyer who later became an influential politician. He joined the Radical Party and was elected Deputy from French Guiana in 1932. He was Undersecretary of State for the Colonies in the Chautemps government of 1937-1938.

During the first part of World War II, he served in the French Navy, on the battleship Provence. In late 1940, he joined Combat, one of the major groups in the resistance. As a lawyer in Marseille, in unoccupied France, he defended persons arrested or persecuted by the Vichy government for their opinions or racial origin.

When Germany occupied the rest of France in 1942, he went underground, and joined the Maquis of Auvergne, as "Commandant St-Just". He and his wife Cheylade established a military hospital in June 1944. That fall he was demobilized, and was appointed by the Radical Party to sit in the "Provisional Consultative Assembly" of the restored French government.

In 1946, he was a French delegate to the first session of the United Nations.

He was named to the Council of the Republic of France (the Senate), which was being reconstituted by appointments. He was immediately elected President of this Council, and became one of the most active members of the Senate. In March 1947, he was chosen President of the Council, by a vote of 141 to 131 over the Communist candidate.

In 1962, he famously opposed the referendum altering the constitution for changing the method of election of the president to a direct election, instead of an electoral college, on grounds that the method for constitutional amendments was not respected, a reform strongly desired by Charles de Gaulle.