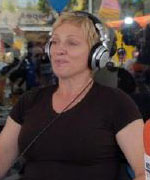 American noted family, the middle daughter of politician Walter Mondale, vice-president under Richard Nixon. Eleanor spent the early '80s in Los Angeles teaching aerobics and pursuing an acting career, the mid-'80s in Chicago working as a dee-jay (when she married and divorced Chicago Bear Keith Van Horne) and since 1989 has been in Minneapolis, where she co-owns an aerobics studio and worked as a TV reporter before joining WLOL as a deejay.

After a brief fling with rocker Don Henley in late 1989, she plans to marry fellow disc jockey Greg Thunder, also 30, in early 1991.

Mondale confirmed on June 20, 2005 that she had been diagnosed with brain cancer. Earlier in the year, she had noticed that her vision got a bit blurry at times but didn’t seek medical care. While on a camping trip on May 16, 2005, at about 4 AM, she had a seizure, with another one occurring 10 minutes later. Doctors found two tumors on her frontal lobe, and on May 31, she received the news that the tumors had proven cancerous. She expects to beat the disease with chemo and radiation to shrink the tumors; so far there is no evidence that the cancer has metastasized. The only daughter of politician Walter Mondale married musician Chan Poling, her third husband, less than a week before she made public her battle with the dreaded disease. She died of brain cancer in Prior Lake, MN on September 17, 2011.

Shelley Ackerman quotes a mutual acquaintance, from her