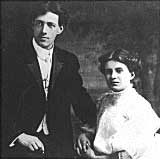 Canadian-American evangelist, faith-healer, missionary, and celebrity, the founder of the International Church of the Foursquare Gospel in Los Angeles. Arriving in Los Angeles in 1918, her theatrical religious spectacles made her a top attraction within five years and she was dubbed the "Barnum of Religion." The media followed McPherson avidly as she made great copy, from her religious services to her flamboyant personal life.

Aimee Kennedy was the daughter of a Methodist middle-aged farmer and a Salvation Army evangelist 34-years younger than her husband. She grew up in rural Canada and shocked her parents when she announced her theatrical intentions. Her mother was more encouraging of her daughter's religious vocation from the time that she was a baby. When Aimee found her Pentecostal niche, Mother and daughter worked side by side until they developed a feud in which Aimee broke her mom's nose.

At 17, she met Irish Pentecostalist, Robert Semple on the revival circuit. The couple married the following year and left to China to set up their missionary post. Her husband died of dysentery in Hong Kong and in 1909 McPherson returned to the U.S. with her infant daughter, Roberta. She married a grocery clerk, Harold McPherson and the couple had a son, Rolf, after which the family joined the revival tent circuit. Her husband disliked the revival tent life and tried to order McPherson to give up her religious calling, whereupon she left him in 1916. With her mother, secretary and children she began her travels by car on revival tours. They pitched tents when the weather was good and slept in the car during storms. She healed members of her audience in small towns as they crisscrossed the nation.

In 1918, with $10 and a tambourine, McPherson settled in Los Angeles. In those days, the city was already a hotbed of religious cults; within five years she was a top attraction in tinsel town. She wore a nurse's uniform during her faith-healing services and soon drew larger and larger crowds, with dramatic stories written about her flashy performances. McPherson's appearance generated controversy from reporters and jealous male ministers. Her tinted blonde hair, Parisian gowns and makeup gave her a striking movie star persona. As she stood before crowds of 5,000 in a while gown with flowing sleeves, emblazoned with a crimson red cross, the lame and the halt stood in lines to come up to where she could place her hand on their heads in her healing services.

Among her escapades, on 5/18/1926, McPherson disappeared while swimming in the ocean in Southern California. Five weeks later, she turned up near the Mexico-Arizona border. She claimed to have been abducted by three outlaws and held in a desert shack in Mexico. Police investigators were unable to shed any light on the incident and her clean clothes and fresh appearance cast doubts on her story. The writer H.L. Mencken and others defended McPherson as the Los Angeles District Attorney's office tried to investigate the colorful evangelist. Her critics believed she spent the period in a love nest in Carmel, CA. After the incident blew over, McPherson hit the road again on a religious revival tour to save her reputation. Her popularity also gave the chance to do some real service. During the great depression, the Angelus Temple Commissary fed many of the poor in Los Angeles, sometimes better than the welfare agency in the city. As an evangelist and outstanding showman she offered salvation, healing and baptism, playing to huge audiences in the $1.5 million Angelus Temple. Throughout her lifetime she set up 400 churches, 200 missions, a Bible college and a radio station.

McPherson's marriage to Harold McPherson ended in divorce with his charge of desertion in 1921. She remarried for the third time in 1931 to a 250-lb baritone singer she met during one of her biblical stage productions. Her third husband, David Hutton, Jr., was slapped with a breach-of-promise suit by another woman two days after his marriage to McPherson. Greatly distressed, she left on a European tour, leaving her husband behind. He divorced the evangelist while she lingered in Europe. Despite her success and her large congregations, McPherson had financial troubles throughout her religious career.

On 9/27/1944, McPherson died in a hotel room in Oakland, CA from an accidental overdose of barbiturates.