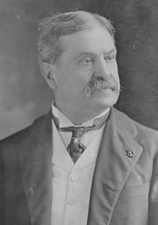 American lawyer and politician, he served as a Republican U.S. Representative and Senator from Illinois. He is the father of Winnifred Sprague Mason Huck.

Mason's family moved to Bentonsport, Iowa when he was 8. He attended Birmingham College. After graduating, he taught at Bentonsport Academy, which he had previously attended. After studying law, he moved to Chicago in 1872 and was admitted to the bar.

Mason was elected to Congress in 1886 and again two years later. Following his defeat in 1890, he returned to law practice in Chicago in 1891 but was elected to the U.S. Senate in 1896. After one term, he returned to Chicago. He served three more terms in the House from 1917 until his death. On 5 April 1917, he was one of 50 representatives who voted against declaring war on Germany. He died on 16 June 1921 at age 70 in Washington, D.C.

Sy Scholfield quotes "Mason Counts on Luck," The Inter Ocean (Chicago, Illinois), 23 August 1902, page 12: "Senator Mason has figured out that he is bound to win ... because of the predominance of the lucky number '7' in the affairs of his life. He was born at 7 o'clock in the morning on the seventh day of the seventh month; he was the fourteenth child of his parents..."