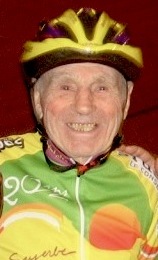 French quasi-supercentenarian cyclist who was the holder of the world record for cycling 100 km and for the distance cycled in one hour, in both the 100–105 and over-105 years old age categories.

Marchand, a former firefighter, shoe and wine seller, bought his first bicycle when he was 66 years old (although he won his first race at 14). Also gymnast, he specialized in the human pyramid. He became famous when he cycled 24 km in one hour on 2 February 2012 at age 100. He established another record when he cycled 100 km in Lyon on 28 September 2012 in 4 hours 17 minutes.

According to physicians, his small size (1.50 m/ 4 ft 11 in) represented a big advantage. He had the heart of a man aged 50! On 10 January 2018, he decided to retire because of arterial hypertension. After his 108th birthday, he stopped riding (due to hearing loss).

He was a member of the French Communist Party and the CGT Trade Union, the longest-serving living member, with 90 years of membership. At the time of his death was one of the oldest remaining World War II veterans.