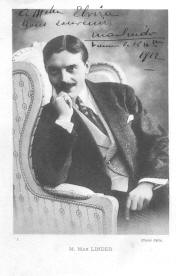 French actor in stage and film, writer and director. Leaving school at 17 to study drama, he went into a stage career. An internationally known comedian by 1910, he wrote and directed all of his own films from 1911.

Linder entered the Army in 1914, a victim of gas poisoning, he suffered ill-health after that time.

He was widely known for his slapstick, silent screen comedy, always playing the dapper dandy of the idle class. His career waned, and he and his wife committed suicide in a Paris hotel 10/30/1925.

B.R. in hand from Steinbrecher.