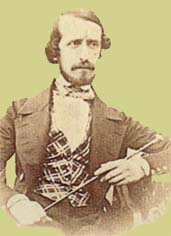 Italian nobleman, a brother of Giacomo Leopardi, of whom he was the one-year-younger playmate and closest confidante. Carlo Orazio is noted for actively collaborating with the scholar Prospero Viani to whom he wrote more than fifty letters between 1844 and 1877, to build a memoir of Giacomo's youth.

After Giacomo's departure from Recanati in 1818, their relationship continued as pen pals. Carlo Orazio's life was shaped by his marrying for love rather than reasons of convenience, at the cost of sacrificing his relationship with his family. He lived with his in-laws. Widowed in 1850, in July 1858 he married a second time.

Count Carlo Orazio Leopardi worked as the Post Office Director in Ancona and later held the roles of Gonfaloniere and Elder in the Recanatese judiciary. He died from a heart attack in Recanati on 11 February 1878 at age 78.

(Translation: In the Book of the House of Leopardi, all Monaldo, we read: « On 12 July 1799. - My second son was born at 24 ¼ [00:12 AM], happily delivered by my wife Adelaide, who however ran near danger of death, from which she was freed with divine help and through the operation performed excellently by the fine surgeon Domco Giordani).