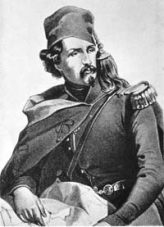 French general who played a part in the political events of 1848, both as a member of the Chamber of Deputies and as a military commander. Under the regime of General Cavaignac he was for a time minister of war (June 28 – December 20, 1848). From 1848 to 1851 Lamoricière was one of the most conspicuous opponents of the policies of Louis Napoleon, and following the coup d'état of 2 December 1851 he was arrested and exiled.

His last years were spent in complete retirement in France where he had been allowed to return in 1857. He died at Prouzel (Somme) on 11 September 1865.