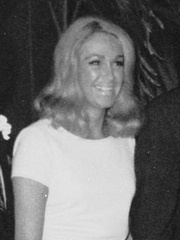 American author and wife of 1960 U.S. Senator Edward Kennedy 1958-1982. A shy, retiring person, Joan is often to described as vulnerable. A biography by David Lester, "Joan the Reluctant Kennedy," was published in 1994 and an unauthorized biography, "Living With the Kennedy's: The Joan Kennedy Story" was written in 1985 by Marcia Chellis, a confidant Joan had met in AA. Arrested twice in three years on DWI charges, Joan finally lost her license to drive in May of 1991.

Born into the upper class and living only three blocks from the Kennedy mansion in Bronxville, Westchester, NY, Joan Bennett had Golden Girl striking good looks. She did very well in school attending Sacred Heart Convent School, of which Rose Kennedy was an alumna, then Manhattanville College with Jean Kennedy. Hand picked because of her background, she was the most likely candidate for the youngest of the Kennedy sons, Edward. Rose asked son Teddy to give a speech at the dedication of a new gymnasium donated in honor of his sister Kathleen at Manhattanville's new campus in Purchase, NY, October 1957. Jean introduced Ted to Joan who was immediately attracted to him.

After her graduation in June 1958, Teddy asked her to visit the family in Hyannis Port, MA. An interview visit with Rose didn't bother Joan. She was invited to visit the family several times during the summer of 1958 at their compound. All their dates that summer were well chaperoned which suited Joan as she wished to remain a virgin until marriage. On her last visit Ted asked if she would like to get married and she said yes. Joan was used to being courted, but Ted couldn't be bothered, he was on the campaign trail with brother John. Their engagement party was arranged and Ted didn't arrive until the party was half over, coming in through servant's quarters, handing Joan an unopened box containing the engagement ring his father Joe had purchased for her. When she started having second thoughts, her parents visited with the elder Kennedy who demanded the wedding take place as planned as he would have nothing in the papers about a son of his being tossed over. Their wedding took place in November 1959 with Cardinal Spellman officiating.

She had difficult pregnancies and three miscarriages. Daughter Kara was born in 1960, Ted, Jr. in 1961 and Patrick, 1967. It was mentally and emotionally difficult to deal with a son with bone cancer and a philandering husband who made headlines with an incident of driving off a bridge near Chappaquiddick, MA on 7/18/1969, killing a passenger, Mary Jo Kopechne.

Joan insisted that she didn't have a drinking problem until the early 1970s though people had noticed her problems with alcohol as early as 1963. She joined Alcoholics Anonymous in 1974, being admitted to private sanitariums at least three times during the year. The family hired a priest psychiatrist who flew to Washington each week to talk with Joan, assured of his confidentiality. She separated from her husband, moving to Boston and returning to school in April 1977, then reuniting with him in November 1979 for his campaign. At one point she started wearing outrageously provocative clothing thinking that she no longer appealed to Teddy. They divorced in 1982, and she has remained on friendly terms with Ted and his second wife, Victoria; being included in many family functions.

In November 1992 her first book "The Joy of Classical Music" was published. She had a mild heart attack on 5/10/1999, Boston after she underwent angioplasty; a full recovery was expected. Joan keeps herself busy with aerobics, weight lifting and yoga a couple of hours a day at the Candel Spa in Boston and she takes her charity work even more seriously. Her goal has been to mentor young students in the Boston public schools, helping to launch a curriculum highlighting courage and stimulating interest in music.

Her greatest joy appears to be spending time with her children. Kara is working in television and video production, Ted Jr., is a lawyer in New Haven and Patrick is a congressman. She is often seen swimming with her four grandchildren at the home of her ex-husband, Ted, in Hyannisport.

Joan was arrested on 9/10/2000 on another DUI after nine years of declared abstinence. According to witnesses, her Buick careened precariously around the road. She told a female police officer that she had been home looking at old pictures and gotten sad, leading to a drink or two. According to her cousin, Joseph Gargan, Joan had been faithfully attending her AA meetings and friends insist that she was dedicated to sobriety. Kennedy was released after posting bail and is set for a pretrial hearing for 10/06/2000. Her trial of 11/07/2000 brought her a sentence of two years probation and random alcohol testing.

In late February 2005 it was revealed that the previous year her three children had been granted temporary custody of their mother in order to ensure that she receives treatment for her alcoholism. Her son Patrick is seeking to be appointed her permanent legal guardian. At about 5 PM EST on March 28, 2005 she was taken to a Boston, MA hospital after a passer-by found her lying on a sidewalk, unable to get up. Kennedy was treated for a concussion and broken shoulder.

As if she didn’t have enough problems, Joan Kennedy was diagnosed with breast cancer. On October 11, 2005, she underwent a lumpectomy in a Boston, MA hospital.

Sy Scholfield notes a different year and date from her in "The joy of classical music: a guide for you and your family: Volume 1 (N.A. Talese/Doubleday, 1992), p. 2: "I was born on September 2, 1936, the oldest of two daughters. I was named for my mother, Virginia Joan Bennett, but my parents called me Joan so as not to have the confusion of two Ginnys in the house." Same data in "Jackie, Ethel, Joan: women of Camelot" by J. Randy Taraborrelli (Warner, 2000), p. 126: "Virginia was born in the early- morning hours of September 2, 1936, at Mother Cabrini Hospital in Riverdale, New York, daughter of Harry Wiggins Bennett and the former Virginia Joan Stead, after whom she was named." Scholfield finds no notice of birth in the New York Times in 1935 or 1936.