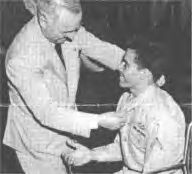 Silvestre S. Herrera (being decorated by President Truman at the White House, 23 August 1945)

Mexican-American Private First Class of the United States Army who received the Medal of Honor for his heroic actions in Mertzwiller, France during World War II.

After his one-man charge on an enemy stronghold resulted in the single-handed capture of eight enemy soldiers, his unit was attacked by a second across a minefield. Herrera again single-handedly took on the enemy, losing both his legs beneath the knees to mine explosions yet continuing to provide covering machine gun fire that allowed his comrades to overrun the enemy position in a flanking action clear of the minefield.

Born in Mexico of Hispanic heritage, Herrera was the only living person authorized to wear both the Medal of Honor and Mexico's Order of Military Merit (First Class) at the time of his death. A legend in the state of Arizona, he was honored by the city of Phoenix officially renaming the portion of 3rd Street that runs from Indian School Road North into the park, "S. Herrera Way".

Wikipedia has 17 July 1917 apparently in error and states that "Herrera was born in the Mexican city of Camargo, Chihuahua, and not, as he believed until he was twenty-seven, in El Paso, Texas. His parents died in an influenza epidemic when he was only a year old, and the man he had thought was his father was really an uncle who had brought the 18-month-old Herrera there to provide him with a better life in the United States" [1].

It seems that this uncle was his mother's brother and the infant was given their surname, Herrera.