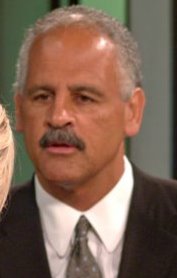 American educator, author, businessman, speaker, podcaster, formerly a champion basketball player. The son of a construction worker and a mom who worked with handicapped kids, Graham grew up to be charming, polite, and in-charge kind of guy - and tall - 6' 5". He played basketball while in University and pro-ball in Europe. Earning a masters in education, he became a partner in the public relations firm of Graham-Williams.

Graham had a brief marriage to Glenda Brown and has one daughter, Wendy. Several times at social functions, he met Oprah Winfrey and asked her out, but, overweight and insecure, she could not understand why this gorgeous guy was interested in her. She finally said yes, and they began their relationship in May 1986. Graham and Winfrey were engaged to be married in November 1992, but later decided they would rather have a "spiritual union".

B.C. in hand from Edith Thayer