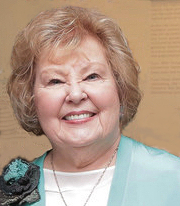 American Christian singer-songwriter, author, speaker, editor, and academic. She is married to Bill Gaither and together they have written more than 700 songs. The Gaithers began writing songs in the 1960s, and many of their songs (including "Because He Lives", "I Am Loved", "Something Beautiful") went on to become church hymn book standards across North America and around the world.

Gloria Gaither performed, traveled and recorded with the Bill Gaither Trio from 1965 through 1991. Since 1991, she has served as a performer, recording artist, songwriter, scriptwriter and narrator for the Gaither Homecoming series of television broadcasts, video and DVD releases, and audio recordings. In 2002, Gaither launched Homecoming: The Magazine and she currently acts as writer, interviewer, and contributing editor.

In 2000, Bill and Gloria were named Christian Songwriters of the Century by the American Society of Composers, Authors and Publishers (ASCAP), an award based on the songwriters who have had the most songs recorded over the past 100 years. Gloria is the recipient of seven honorary doctorate degrees, and she is the author of more than 40 books including 20 children's books.