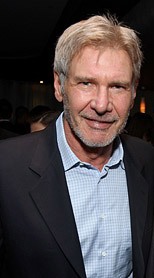 American actor, one of Hollywood’s hottest male stars since 1983 for his role as Han Solo in the trilogy, "Star Wars," "The Empire Strikes Back," and "Return of the Jedi" made at three year intervals starting in 1977. He became famous also for the "Indiana Jones" trilogy, and for hits such as "The Fugitive," "Clear and Present Danger," and "Air Force One," he is reputed to get $20 million per picture and a 15 per cent cut of the box office gross. He still does much of his own stunt work, plays tennis, and flies his Beechcraft. He has been married for 14 years to Melissa Mathison who scripted "E.T.," and whom he met on the set of the 1979 film, "Apocalypse Now" in which he had a small part and she was script supervisor.

Ford grew up in Des Plaines, a suburb of Chicago, Ill. He was the shy eldest son of an advertising executive father (Catholic) and a homemaker mother (Jewish), and was routinely beaten up by bullies. His younger brother, Terrance, is a California-based actor.

At Maine Township High school, he was president of the social science club and the model train club. He later enrolled in Ripon College in Wisconsin, but was not an enthusiastic student, majoring in Philosophy and English and flunking out in his senior year. By that time, though, he had taken an acting class, and found he enjoyed storytelling.

In 1964, Ford married his college sweetheart, Mary Marquardt, and they drove to Hollywood where, soon after arriving, he signed a $150-week contract with Columbia. His first movie role was as a bellhop in "Dead Heat on a Merry-Go-Round," 1966. He played small parts on a few television series, and when the roles quit coming, he taught himself carpentry. In 1973, George Lucas offered him a small part in "American Graffiti." Francis Ford Coppola, who produced the movie, later hired him for minor roles in "The Conversation" and "Apocalypse Now." Coppola also asked Ford to build him a portico entrance to his Los Angeles office where Lucas was working on "Star Wars," and then asked Ford to help him audition actors. The rest is history, and Ford never went back to his carpentry work outside of personal projects.

His two sons by Mary, whom he divorced in 1979, are Ben, a chef in Los Angeles, and Willard, a substitute teacher in Oakland who is father of Ford’s first grandchild, Eliel. He and Melissa Mathison, with whom he shares a distaste for publicity, have two children, Malcolm (1987?) and Georgia (1990?). Sadly, they separated in November 2000. With their usual lack of fanfare, they quietly reconciled about February 2001 but it proved too difficult: Melissa filed for separate maintenance on 23 August 2001.

With a love of airplanes, Ford has his pilot's license, owning three planes and a helicopter in 1998. He had to cut back on his tennis in the '90s when his knees and back began to trouble him.

After casual dating, Ford was seen as a couple with 37-year-old actress Calista Flockhart after they met on 20 January 2002 at the Golden Globes. They married on 15 June 2010 in New Mexico.

On 5 March 2015, Ford made an emergency landing of his plane on the Penmar Golf Course in Venice, California. He suffered a broken pelvis and broken ankle during the accident, as well as other injuries.

B.C. in hand from Barbara Frigillana

It must be noted that Illinois law required up to 1959 that all births had to be registered using CST (6h west of GMT) even during times when, like in July 1942, daylight saving time was in force. But according to American Atlas, 5th ed. page 116, the Illinois law was not applied during WW2, i.e. births were recorded with CWT.