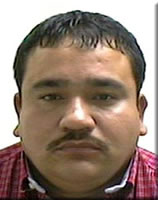 Mexican drug lord and high-ranking lieutenant of the Gulf Cartel. He was a former state judicial policeman who protected the ex-leader of the Gulf cartel, Osiel Cárdenas Guillén. Upon his arrest, Flores Borrego became the right-hand man of Jorge Eduardo Costilla Sánchez, the former leader of the criminal organization.

Although born in Matamoros, Flores Borrego was closely linked to the city of Reynosa, Tamaulipas, where he served as the Gulf cartel's regional leader on and off for many years after serving as a policeman during the governorship of Tomás Yarrington (1998–2004) – the peak era of the Gulf cartel.

On 2 September 2011, Flores Borrego was found dead along with a local police officer on the outskirts of the border city of Reynosa, Tamaulipas. The Mexican authorities indicated that he had been killed by members within his own criminal group over disagreements and territorial disputes.