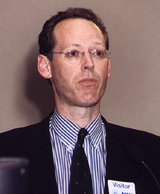 American medical anthropologist, physician and humanitarian who had a profound effect on world health. The subject of Tracy Kidder’s 2004 book, Mountains Beyond Mountains, Farmer spent his time between Harvard University where he taught and rural hospitals in impoverished nations, first in Haiti and since 2004 in Rwanda. Co-founder of Partners in Health, Farmer’s mission was to address the injustices of poverty that are perpetuated by the inequality in health care. He was a critic of the Bush administration’s policy on withholding aid to Haiti, saying, "Why are we blocking assistance to the poorest country? It’s bizarre, unfair and doesn’t reflect the American people’s will."

Second-oldest of six children, his upbringing was unconventional, with much of his childhood spent in an old school bus that became a mobile home in a trailer park in Birmingham, Alabama. His strong-willed father, nicknamed "The Warden", later moved the family onto a rebuilt boat, moored in a Florida Gulf Coast bayou. A brilliant student, Farmer won a scholarship to Duke University where he studied anthropology and became interested in Haiti. When he traveled there in 1983, he committed himself to doing something about the destitute conditions he found. After earning his bachelor’s degree from Duke in 1982, he went to Harvard Medical School, graduating in 1984. In 1987, he co-founded Partners in Health to treat the sick and train health workers in the poorest part of central Haiti. With his doctorate in medicine and medical anthropology from Harvard, he became professor of social medicine at the university as well as chairman of the division of social medicine at Brigham and Women’s Hospital. He learned French, Haitian Creole and Spanish, and in 1993, he won a $250,000 MacArthur Foundation "genius grant" which he gave to Partners in Health. In 2002, he did the same with a $250,000 Heinz Foundation Award.

His biographer Tracy Kidder describes Farmer as energetic, witty, voluble, intense and always optimistic, a man who made almost superhuman demands of himself. He was humble about his accomplishments, yet passionate about his work. In addition to fulfilling his mission, Farmer had a family of his own. In 1996 he married Didi Bertrand, a Haitian woman. A medical anthropologist, Didi ran community health workers programs wherever their work brought them. The couple welcomed their first child in 1998, a daughter named Catherine. In February 2008 their son Sebastian was born. A few months prior to Sebastian’s arrival, they adopted Elizabeth, a Rwandan child who had been abandoned at birth.

Farmer is the author of several books including AIDS and Accusation: Haiti and the Geography of Blame (1993), Infections and Inequalities (2001), To Repair the World: Paul Farmer Speaks to the Next Generation (2013) and Pathologies of Power: Health, Human Rights, and the New War on the Poor (2003) and Fevers, Feuds, and Diamonds: Ebola and the Ravages of History (2020).

He contributed to other publications as well in an effort to disseminate his message. In November 2004, just as he had done in Haiti and in several other countries, Farmer brought Partners in Health to Rwanda. By the following summer, the first hospital was opened there.

Paul Farmer died in his sleep from an acute cardiac event in Butaro, Rwanda on 21 February 2022 at the age of 62.

PT quotes birth certificate for 7:59 AM.