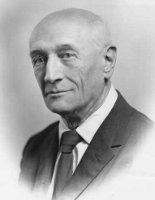 French-American Professor-Emeritus of Philosophy at Brown University, a writer and lecturer who had a lifelong, intense interest in psychical research. He became a naturalized U.S. citizen in 1910, and obtained his PhD at Harvard in 1912. He taught, lectured and wrote, and was a philosophy professor at Brown University for 30 years.

Curt John Ducasse did not start out as a philosopher. He attended the Lycee at Bordeaux and later Abbotsholme School in England, with an early interest in mathematics and science. He planned to take a course in civil engineering at the Ecole Centrale in Paris. However, he became ill, gave up the studies, and moved to Mexico when he was 19 years old.

In Mexico, he functioned as a "human elevator," carrying bolts of cloth up and down the stairs of a dry-goods store, sleeping at night on the store’s counter to save money. He left the position to work for a window glass company, and, then moved to New York where he tried to run a lace shop on Fifth Avenue but the business failed. He got a job handling Spanish-language correspondence for a music publishing firm. He was sent back to Mexico a year later, where he served as the company’s salesman for sheet music, the job lasting three years. Returning to New York, he was a stenographer-typist for the international department of an insurance firm which also utilized his multilingual abilities. (His faultlessly typed letters became a trademark all his life.)

Returning to the University of Washington in 1912, Ducasse stayed there in various philosophy teaching positions until 1926, when he joined Brown University. He remained there until his retirement in 1958. While Professor Emeritus at Brown, he lectured at a wide variety of New England universities, and was chairman of Brown’s department of philosophy from 1930-1951, and acting dean from 1947-1949.

Ducasse was interested in all aspects of parapsychology, ESP, precognition and mediumship with attempts to formulate a theory that would account for the occurrence of paranormal phenomena. His books include "Philosophy and a Science," 1941, "Nature, Mind and Death," 1951, "A Critical Examination of the Belief in a Life After Death," 1964. He had an active association with the American Society for Psychical Research, joining its Board of Trustees in 1951 and serving as chairman of its Publications Committee in 1959. He published numerous articles and reviews in its "Journal."

What came to be Ducasse’s metaphilosophy was initiated in a vivid and luminous insight that he later recalled as the most extraordinary state of mind he had ever experienced. His insights composed the content of what he later called "philosophical liberalism" and his refined views were contained 20 years later in "Philosophy As a Science: Its Matter and Its Method," 1941.

In 1921, he married Mabel Lisle, an art student at the University of Washington. The couple nurtured a wide variety of wildlife, including rodents and chipmunks.

LMR quotes extract from birth certificate in hand from Steinbrecher (for 12 Noon, Angoulême).

In April 2021 a typo was corrected: the place was changed from Argoules to Angoulême after checking the birth record.