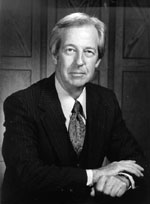 American landscape architect who served as director of the National Park Service from 1980 to 1985.

Dickenson began his NPS career as a ranger at Grand Canyon National Park in 1946 and served in a wide range of park and central office assignments — most prominently as head of National Capital Parks, deputy director, and Pacific Northwest regional director — before ascending to the directorship in May 1980. Having risen through the traditional ranks and enjoying the respect of his colleagues, Dickenson was enthusiastically welcomed to the job and supported in his effort to restore organizational stability after a succession of short-term directors. As when Walker's deputy, he preferred improving the service's stewardship of its existing parks to seeking new ones. The only Interior Department bureau chief to be retained by the Reagan administration in 1981, Dickenson obtained its support and that of Congress for the Park Restoration and Improvement Program, which devoted more than a billion dollars over five years to park resources and facilities. Dickenson retired in March 1985.