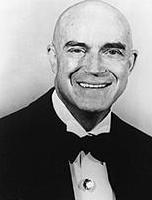 American character actor. Curtis made his film debut in the 1948 Orson Welles adaptation of Macbeth. His theatrical career began in 1955 as a Broadway stage manager. His first appearance as a performer was in a 1965 revival of You Can't Take It with You. In 1971, he was awarded the Tony Award for Best Featured Actor in a Musical for The Rothschilds. His TV work included a recurring role as the owner of Melville's Restaurant in Cheers. His best known work in animation was as the voice of Lord Balthazar of The Smurfs from 1981-1989. Curtis died on October 13, 2002 from complications from Alzheimer's disease in a Bountiful, Utah nursing home, aged 79.