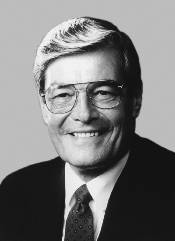 American politician and campaigner for the 1979 U.S. presidential Republican nomination, from a family with generations of political service in the state of Illinois. Defense and foreign policy have been his chief concerns during his years of public service. He has authored three books, "The Democrats’ Dilemma," 1964, "Surrender of Panama: The Case Against the Treaty," 1978 and "The Sum of Good Government," 1976. He has edited other books and contributed to numerous publications.

He and his wife of over 40 years have one son, seven daughters, and five grandchildren.

Philip Miller Crane is the second of five children of a psychiatrist and his wife. He was born into a conservative family, Republican since the day Abraham Lincoln patted the head of the boy who would be Crane’s great grandfather. Crane’s father was a speechwriter for Senator Robert A. Taft Sr. during the 1952 nomination activities, and wrote a column called "The Worry Clinic" that was syndicated in 300 newspapers. He has a brother who is also an Illinois Congressman.

Growing up in a working-class neighborhood on Chicago’s South Side, Crane went to the local public grammar school and to South Shore High School. He attended De Pauw University from 1948 to 1950, two years later receiving a B. A. degree in history and psychology from Hillsdale College in Michigan. He did postgraduate work at the University of Michigan and the University of Vienna between 1952 and 1954. He entered the U.S. Army as a private and served in Europe, being discharged as a specialist third-class in 1956.

Crane was advertising manager at the Hopkins Syndicate, where his father was "columnist-president." Upon the death of his older brother George, a Marine pilot killed during an exhibition at the Glenview Naval Air Station in 1956, Crane enrolled at Indiana University to complete work for a doctorate in history, attaining it in 1963.

He became an assistant professor at Bradley University in Peoria, where he taught courses in American and Latin American history between 1963 and 1967. He then moved to Northbrook, Illinois, to become director of schools at a fundamentalist Christian institution.

As his involvement in politics grew, he became a public relations expert for the Republican party in 1962 and was director of research for the Illinois Goldwater-for-President Committee in 1964. After Goldwater’s defeat, Crane worked until 1968 as an adviser on political and national issues to Richard Nixon.

Crane made his first bid for elective office in 1969 when Illinois’ Thirteenth Congressional District seat became open. He won the special election on 12/25/1969 and repeated the victory in the general election of 1970.

He announced his candidacy for president on 8/02/1978, the earliest in modern times by a presidential hopeful. He received a disappointing percent of the vote in the primaries, and his candidacy never really got off the ground.

Crane is presently US Representative for the Eighth Congressional District of Illinois.

He is Vice Chairman of the full Ways and Means Committee, and presides as Chairman of the Subcommittee on Trade. He is also a member of the Joint Committee on Taxation and was appointed by the Speaker of the House as one of the official advisors to U.S. delegations to international conferences and other meetings.

He married Arlene Catherine Johnson, a young acting student, on 2/14/1959. Together for over 40 years, they have one son, seven daughters, and five grandchildren.

The most senior Republican in the House, he announced on 3/21/2000 that he was taking a 30-day leave of absence from Congress to seek treatment for alcoholism.

B.C. in hand from the Wilsons