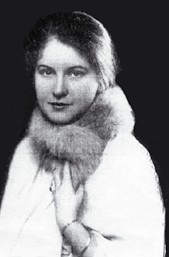 German propagandist, industrial spy, dramaturge and foreign press chief in the Reichsnährstand. As a Gestapo agent and Special Representative in Romania she prompted the DC circuit of the Romanian-German Nazi organizations.

Coler came from a conservative, wealthy family of artists. Her father was Fritz Heinemann, a successful German sculptor. Edit's mother, Alice Heinemann (née Tonn), was the daughter of a wealthy riding master. Edit spent her childhood with her sister Alix, who was three years younger, in the vicinity of educated artists. Both girls were instructed in French by their French governess. In 1902, Edit's parents separated. Her mother then married the sculptor, painter and graphic artist Karl Ludwig Manzel, whose acquaintances included Kaiser Wilhelm II and leading social circles of the Wilhelmine Period.

In 1917 Edit entered into a marriage of convenience with Lieutenant Ulrich von Coler, later colonel of the Wehrmacht and the Finnish army. This relationship gave her a title of nobility. Three years after the birth of their only daughter, Jutta, the couple separated in 1922.

Edit instructed her cousin Margarete Himmler, the wife of Reichsführer SS Heinrich Himmler, in finer manners and used their relationships as a springboard for advancement into Nazi leadership circles.

The wealthy businessman Paul Lohmann enabled Coler to live a luxurious life until 1930, which she used to found a yachting school and - as the only woman of her time - to obtain her master's licence. With her assets she supported conservative right-wing associations, because she saw Germany as a humiliated victim of the Versailles peace treaty.

In May 1931 she joined and made a career in the NSDAP (Nazi party). As a dramaturge at the State Theatre she operated an "espionage salon". In March 1935, on the recommendation of Himmler, she became press officer abroad at the Reichsnähramt under Richard Darré, Reichsbauführer and head of the Main Race and Settlement Office.

Coler also found a generous patron in Romania, 54-year-old industrialist Nicolae Malaxa, Romania's richest man with a great influence on the press and part of the camarilla of the Romanian king Carol II. Malaxa arranged a lucrative one-year contract with the newspaper Curentil for Edit.

The "extremely attractive blonde lady" had her first spectacular success when, in October 1938, she broke the "brotherhood" between the Romanian-German radical and moderate Nazi parties that had been rivals since 1935, with the leaders Alfred Bonfert (German People's Party of Romania) and Fritz Fabritius (German People 's Community in Romania) within 48 hours.

In the service of the Nazis, she officially worked as a journalist and completed a number of assignments, including preparing the economic agreement with Romania, which was signed on 23 March 1939, securing Germany's oil and grain imports from Romania. According to Coler, she achieved "the peaceful conquest of Romania". Her work led to the first substantial rapprochement between Berlin and Bucharest; Coler described it as "securing peace" and "peacefully gaining a true friend for Germany".

After Romanian King Carlos II abdicated and went into exile, Coler met him privately but without the permission of the German legation. Her unauthorized action angered the superiors in Bucharest and Berlin, so that she was recalled from Bucharest "for political reasons" and had to leave the country on 2 August 1940. In Germany, her passport was taken and she was denied travel abroad until the end of the war.