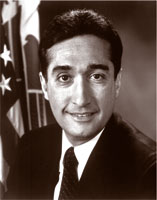 Latino-American politician, the Mayor of San Antonio Texas, once considered as a potential Democratic Vice-Presidential candidate. He was the first Hispanic to ever serve as chief executive of a major US city. Cisneros was one of five exceptional children born to George, a military civil servant, and Elvira Cisneros.

In 1968, he earned a BA from Texas A & M, as well as a Master in Public Administration from Harvard in 1973. He also received a Doctorate of Public Administration from George Washington University in 1975. He entered politics at that time with his election to San Antonio City Council. In April 1981, he won the election of Mayor by a landslide, 94%.

In 1969 he married Mary Alice; they had three kids; two girls and a boy named John Paul after the Pope. Their son was born on 6/10/1987 with a serious heart defect which has since been corrected by surgery. After 19 years of marriage, he publicly acknowledged an affair with Linda Medlar, a woman who served on his fund-raising campaigns. Medlar was the wife of a wealthy local jeweler who was involved with Cisneros for a year. During the height of these rumors in 1988, he announced that he would not run for a fifth term of as mayor nor pursue the next step and run for State Governor.

In June 1989 he left public office to begin work in a pension fund management firm. He returned to government work after being appointed Director of the Federal Reserve Bank in January 1991. In August 1992, he resigned from this position to become Senior Campaign advisor to Bill Clinton. Clinton selected Cisneros as Secretary of HUD (Housing and Urban Development) in December 1992. The following year, in September, he took charge of a housing project for black families in Vidor, Texas, a city well-known for its Ku Klux Klan connections. The families were being harassed and forced to leave their homes. In January 1994 he ordered armed guards to accompany the families who were returning home to the Vidor projects.

Actions such as these earned him the reputation of being the chief defender of civil rights in the Clinton Administration.

In October 1991, Cisneros' wife filed for divorce. However, the suit was dropped when the couple reconciled in November. On 7/29/1994, Medlar filed for fraud and breach of contract against Cisneros for not paying her $4000 per month as support. However, his problems with Medlar did not end there. In December of 1997, Cisneros was indicted on 18 counts of conspiracy, false statements, and obstruction of justice; he was accused of paying hush money to Medlar to ensure his confirmation as secretary of HUD.

On 9/07/1999, Cisneros pleaded guilty to one misdemeanor count of lying to the FBI. He has to pay a $10,000 fine but faces no jail time. He now heads Univision, a Spanish-language network.