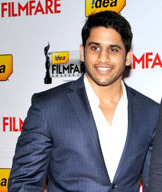 Indian film actor who works in Telugu cinema. He debuted in the 2009 film Josh, directed by newcomer Vasu Varma and produced by Dil Raju. Prior to the release of his first film, he signed his second film with Indira Productions, which was to be directed by Gautham Menon. Ye Maaya Chesave released in 2010 with comparisons drawn to his father Akkineni Nagarjuna's romantic film, Geethanjali.

His next movie was Sukumar's 100% Love co-starring Tamannaah. The movie was shortly followed by Dhada and Bejawada. Chaitanya also appeared in the movie Autonagar Surya. In 2016, he starred in two of the most successful films of the year, Premam (2016 film) and Sahasam Swasaga Sagipo, which earned him critical acclaim. 2017's Rarandoi Veduka Chudham brought further success for him, and making him one of the most sought-after actors in the industry.

Ashish Seth quotes from a web bio, no source given [1].