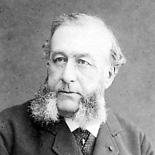 His father, a professor of philosophy, gave him an excellent education at Collège Stanislas (Paris) from 1838 to 1845, where he was the second student to receive an Honorary Award at the Concours General of Philosophy. He then joined the École normale supérieure . He was professor of philosophy at several provincial universities, then spent the doctorate and became a professor at the Ecole Normale in rue d'Ulm in 1858. He was appointed inspector of the Paris Academy in 1861 and a professor at the Sorbonne in 1884. Married to the writer Pauline Cassin. He was elected member of the Academy of Moral and Political Sciences in 1869 and the French Academy in 1874. His works deal mainly with the defense of Christianity against the positivism. The philosophy of Victor Cousin influenced him strongly, but its strength lies in the quality of exposure and criticism rather than in the originality of thought. He is an Officer of the Legion of Honor.