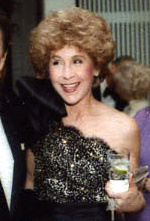 American socialite, philanthropist, and fashion icon who frequently appeared on the International Best Dressed List after 1970, and in 2009 was named in the list's Hall of Fame.

Formerly married to entrepreneur Alfred Bloomingdale and in the same social circle as the Reagans, a friend of Nancy, she was widowed when Bloomingdale died of cancer on 23 August 1982. Shortly before that time, her husband's mistress, Vicki Morgan, instigated a palimony suit that became grist for the media.

After her husband's death, Betsy cut off Morgan's monthly payments. In response, Morgan started an $11 million palimony suit which, ironically, was settled for $200,000 in December 1986, three and a half years after Morgan's death.

Bloomingdale published a book, Entertaining With Betsy Bloomingdale: A Collection of Culinary Tips and Treasures From the World’s Best Hosts and Hostesses, in 1994. She died on 19 July 2016 at her home in Holmby Hills, Los Angeles, from complications from a heart condition. She was 93.

Previously this entry had same data rated A (Dana Haynes quotes her).