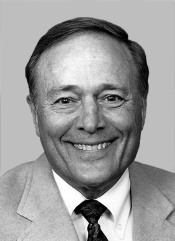 American lawyer and politician, who served two terms, from 1967 to 1971, in the Texas House of Representatives – changing from the Democratic to the Republican party in 1969 – and later represented Texas in the United States House of Representatives as a Republican for 30 years, from 1971 until 2001, serving for his last six years as chairman of the powerful House Ways and Means Committee.

Archer took a politically and socially conservative stance on a variety of issues; among other stances, he supported the death penalty, opposed gay adoption, and called for cuts in welfare funding.

Archer was drafted and served as a captain in the United States Air Force after the onset of the Korean War.