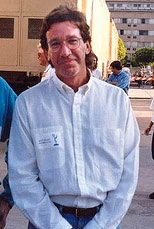 The son of a real-estate salesman and a housewife, Allen was one of six kids, a smart-aleck class clown from the time he was a kid. When he was 11, his dad was killed in a car crash, 1964. Two years later, his mom remarried and the family moved to Michigan. Tim's favorite class in school was shop and his first passion was cars.

After graduation from university, he went into private business - selling drugs. He was arrested in 1979 while dealing coke to a narcotics officer and served 28 months behind bars.

Out on parole, on 7/07/1984,Allen married Laura Deibel, who had waited for him to be released. He began working for an advertising firm in the daytime and doing stand-up comedy at night, drawing on his love of cars and guy-stuff for his material. In 1989, he became both a father (of Kady) and an award winner (as Best Male Comic).

His TV show "Home Improvement" made a debut on 9/17/1991. In October 1994, his book "Don't Stand Too Close to a Naked Man" made No.1 on the New York Times bestseller list. He moved into films with uproarious results best seen in "Galaxy Quest," 1999.

Allen's personal life began to include increased drinking and decreased marital harmony along with other extreme ups and downs. He served 30 days in rehab for a DUI that he got on 5/24/1997. During 1998, he made $77 million: in October 1999 he was rushed to the hospital for an emergency appendectomy. In November 1999, "Toy Story 2" was a bigger hit than the original but at the same time, his wife filed for divorce and custody of Kady.

He married actress Jane Hajduk on October 7, 2006 in Grand Lake, CO; they had gone together for five years.