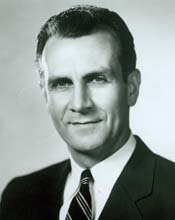 American politician, real estate agent and developer, and a Republican U.S. representative from Texas, the first to have represented a Dallas district since Reconstruction. He served from 1955 until 1965. Though born in Dallas, Alger was reared in Webster Groves, Missouri, a small suburb of St. Louis.

With the coming of World War II, Alger joined the United States Army, assigned to Squadron 5 at the Army Air Corps Advanced Flying School at Kelly Field in San Antonio, Texas. He flew bombers and attained the rank of captain, claiming to be among the first American troops in Japan after the conclusion of the war in August 1945. He received the Distinguished Flying Cross.

In 1945, Alger moved to Dallas and formed his own real estate and land development company. In 1950, Alger announced the development of a 180-lot subdivision in Far East Dallas off Peavy Road which was to bear his name, and is known as Alger Park.