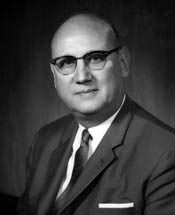 American lawyer and politician, elected as a Republican from Indiana's 4th congressional district to the Eighty-second and to the nine succeeding Congresses (3 January 1951 – 3 January 1971). He was an unsuccessful candidate for reelection in 1970 to the Ninety-second Congress. He served as the United States Ambassador to Ethiopia from 1971 to 1974.