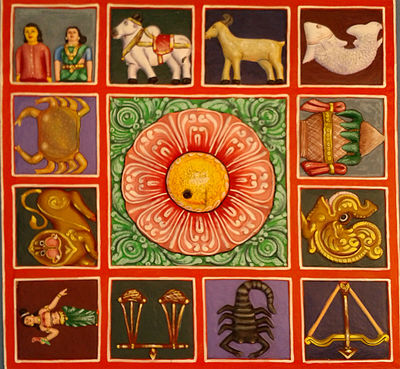 Zodiac symbols on the terrace of a Gopuram[1]

In the sidereal zodiac the signs of the zodiac overlap extensively with the star constellations which they were named for. The sidereal zodiac is most commonly associated with Indian astrology (also known as Vedic or jyotish astrology).

Western astrologers generally work with the tropical zodiac where the start of the zodiac at the spring equinox and 0 degrees Aries is defined as the point at which the sun crosses the celestial equator in a northerly direction on its apparent path around the earth.

Both the tropical and sidereal zodiacs are divided into twelve equal segments of exactly thirty degrees. The sequence of signs is identical, although their interpretations vary somewhat between India and the West.