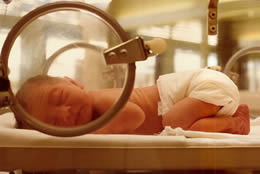 In the middle of the nineties, further progress in technology enabled newborns to be saved who were born even earlier than the 25th/26th week of gestation and whose weight varied between 500 and 800 grams.

In November 1995, Pluto finally re-entered Sagittarius, after an earlier appearance in January that year that had lasted four months. Here, the planet made all his creativity available for research aimed at broadening the horizons, as dictated by the sign and the ninth house, its co-significator.

In January 1995, Neptune transited at 25° of Capricorn and continued on his path until entering Aquarius in January 1998. The imagination and the versatility of the planet is constrained by this sign, which exploits it for its own interests and prestige, as dictated by the tenth house, its co-significator.

In January 1996, Uranus in Aquarius was of great help to Neptune, aiding the realisation of the ideas suggested by the latter, thereby paving the way for innovations through increasingly advanced technology.

The entry of the two planets in Aquarius, co-significator of the eleventh house, gave rise to the first cases of babies being saved who were born at twenty three weeks. The experiments had worked but there was no certainty about the future psychological and physical wellbeing of the child. The opposition that the two planets formed to the fifth house, Leo, influenced the capacity to generate - and so expend - energy: the child alternated between periods of great activity and others when she was lazy and apathetic (Neptune), times of exaltation and dynamism and others of discouragement and inactivity (Uranus). The quadrate that the two planets formed to Taurus, second house, led to confusion and uncertainty for the newborn: the baby’s original clan was made up of doctors and nurses for most of the time and only sporadically of the relatives, who became more important only after discharge from hospital. The quadrate to Scorpio, eighth house, brought the anxieties and fears arising from the emotional abandonment that isolation involves and the pain experienced when the mother leaves to go home.

In newborns who arrive before the 32nd/34th week of gestation, the organism is not functionally complete. The lungs in particular are insufficiently developed because the baby is not able to produce a sufficient quantity of surfactant, a substance required to keep the lung cavity expanded and thereby enable breathing. Given the incapacity for autonomous respiration, the premature baby has to be intubated: this action must take place very quickly, in a few seconds, without use of anaesthetic, and so is experienced in a traumatic and painful way. The respirator to which the newborn is connected, while enabling the child to live, can also cause irreversible damage if it is required for any length of time. In addition, the high percentage of oxygen contained in the respiratory mixture causes a change in the anatomical structure of the lungs, leading to fibrosis, which harms the elasticity of the lungs, and even leads to the more serious disorder, bronchodysplasia: this totally undermines the pulmonary anatomy. 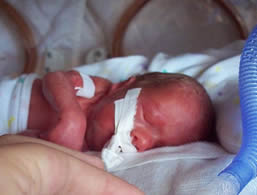 The premature babies born between the 23rd and 28th week of gestation that I analysed present some constants. Nearly all are twins, of whom the first born was often the thinnest and the one who survived. The second was very often delivered by breech birth and nearly always died. The births occurred at an interval of between eight and a maximum of twenty minutes. This means that all the planets were positioned on the same degrees, even the Moon, notwithstanding it is the fastest planet. The intervals in the times of birth were the only difference, but it is fundamental because it caused a difference of some degrees of the Ascendant. This means the same planet slipping into different houses and so determines those elements that will prove to be essential in shaping the development of the two little lives. Most frequently, this involves the two lights, followed by Mars and Venus. The houses in which it is preferable for these differences to occur are the sixth and seventh, the fifth and fourth, the first and twelfth. Most of the time the premature baby who survives has the planet in the fifth or first vital houses, where the Sun and Mars rule, or in the seventh, where the planet is linked to Mars, or it may be located in the sign of Aries. In the natal chart of a twin who dies, the planet is located in the fourth or twelfth house, the most fragile sectors where the Moon is dominant, or in the sixth house, where the planet is suffocated. Another constant is Pluto’s affliction of the Sun or Mercury or Venus in the Gemini-Sagittarius axis, that is, the third house - ninth house, or the Leo - Aquarius axis, that is, the fifth house - eleventh house.

For Camilla and Carlotta, two monozygotic twins, the problems began when they were still in their mother’s womb, five and a half months after conception. An enormous quantity of amniotic fluid in one of the two sacs threatened to suffocate Camilla under its pressure. The removal of the liquid became necessary and this was done in the twenty-fourth week of gestation. But, at the end of June, a delay in the operation caused the rupture of a sac and consequently the birth of the children. Camilla was the first to be born and weighed 820 grams. Carlotta’s was a breech birth and the difficulties in extracting her caused vascular lesions with gangrene in the right foot and leg. She weighed 750 grams and, in the few days she lived, she did not respond to drugs or any of the most modern treatments. 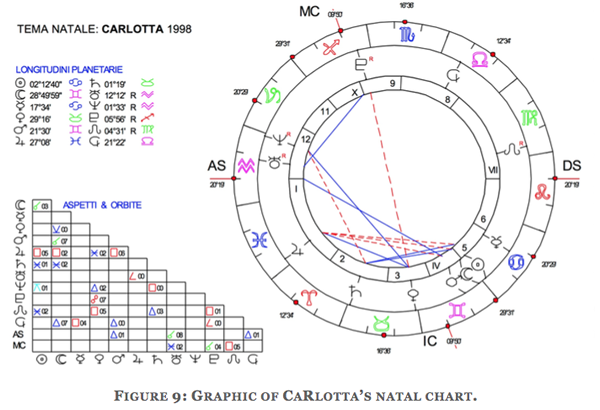 Observing the two natal charts, we see that Camilla’s Ascendant preceded Carlotta’s by 5°: this is the only difference, caused by the twelve minute gap between the two births, but it is significant because it changes the position of the Moon. In Carlotta’s chart, the planet is in the fourth house: the characteristics of Cancer in this way are accentuated, weakening the subject. Moreover, the presence of Jupiter in Pisces, co-significator of the twelfth house, and of Uranus and Neptune in the same house, only increases this fragility. Camilla, on the other hand, has the Moon in the fifth house, co-significator Leo, which also forms a spurious conjunct to the Sun, doubling the strong solar characteristics that instill vitality for tackling the problems at hand. Indeed, Jupiter quadrate to Mars and the Moon located in Gemini cause the baby to experience serious breathing difficulties and, quadrate to the Sun in Cancer, lead to her serious nutritional problems. At birth, Camilla responded well, so much so that the tracheal tube was removed after only fifteen days and replaced with a nasal tube. But repeated respiratory crises occurred subsequently and a tracheotomy again became necessary. 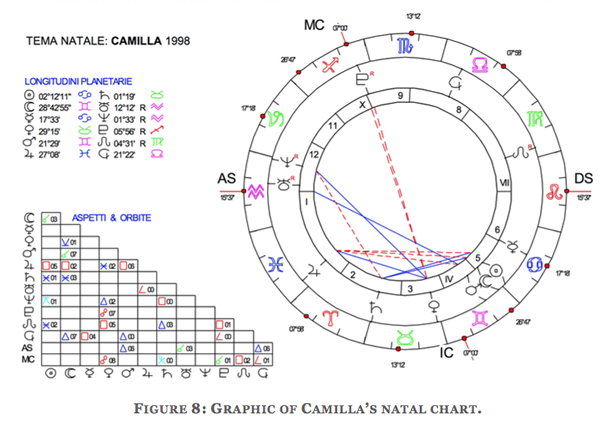 In the early days of March 1999, following one of the most severe respiratory crises, the parents feared the worst but she recovered, although the respiratory problems remained. Her growth was minimal (Pluto quadrate to Venus) and at fifteen months she weighed only 5 kg. It became indispensable to perform a gastrostomy to alleviate the lack of nutrition. Notwithstanding that operation, three months later a further intervention was required on the stomach (fundus plication) to eliminate the reflux of food. Throughout these dramatic events, Camilla displayed surprising vitality, drawn from the well of love transmitted by the constant, concerned presence of the parents (Sun conjunct to the Moon in the fifth house), who stayed by her without a break in hospital, where the child was forced to spend her second birthday. In July 2000, Camilla was discharged: she weighed 9 kg.

The return to the family home brought rapid recovery, she increased in weight and height and, in December of that year, she began to crawl. Her breathing capacity increased sufficiently to enable her to reduce her dependency on the respirator, resorting to it only at night. Jupiter in the first house bestowed a certain notoriety and, in fact, medical scholars took interest in Camilla since she was the only case in Italy of a premature child with severe bronchodysplasia (Jupiter in Pisces) that did not, however, affect either her mobility or cerebral function. Her two biggest problems were refusing to swallow any food and her inability to speak. Again, afflicted Jupiter gave her a psychological block with regard to food, due to the unconscious memory of the violence experienced during forced intubation. The tracheotomy remained, notwithstanding the fact that, at the end of April 2001, Camilla succeeded in breathing spontaneously with the free flow of oxygen through the tracheal filter. However, when ill, she sometimes needed to use the respirator again, one of the obstacles preventing her from speaking. Camilla is so vivacious and intelligent (Moon in Gemini) that she managed to make herself understood just the same by using body language. With the passing of the years, as Camilla grew up, the respiratory problems reduced to the extent that, at the end of May 2006, an operation was carried out to close the tracheotomy. This enabled her to speak, taste food and even move around and travel, although she needed an oxygen cylinder to alleviate respiratory crises, should they arise. 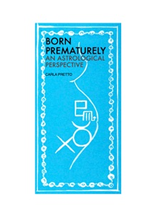 Currently, Camilla is enjoying a varied diet and can speak, albeit not perfectly since certain consonants are still proving too difficult for her to pronounce correctly. She attends municipal school and her scholastic record is good, even though difficulties of various kinds - motor, psychological and cognitive - endure, because of her intellectual capacity and, above all, her constant commitment to learning, in which she is lovingly and directly supported by the mother and, more covertly, by the father. Her contemporaries and school companions accepted her without difficulty thanks to her lively character, lovely face and diminutive presence.

Sometimes, the little one displays an air her mother describes as “celestial” because it seems directed to the sky: she walks on tiptoe as if she wants to find there the centre of her fantasy world, full of dreams and games. The perfect place to project her Neptune in the twelfth house, allowing her to distance herself from a painful reality that was too challenging for so young a child.

Extract taken from:
Carla Pretto:
Born Prematurely - An Astrological Perspective
This e-book can be ordered at: amazon.com

Carla Pretto became an astrology enthusiast in 1979, after attending Capone courses in Turin and Morpurgo's Paduan school where she struck up a friendly "dialectic duel", with Lisa Morpurgo, one of the best astrologers ever. In Verona, where she lives, she started the local branch of CIDA (the Italian Astrological Studies Centre ) bringing the illustrious names in astrology to the city. She resigned in 2010. In May 2012, she began to work for the astrology monthly SIRIO answering readers' letters.
Her website is: www.argo-vr.net

Topics in the Astro Shop
Astro-Databank

Astro-Databank, the world-wide unique collection of more than 60`000 chart data can be used for free! It not only contains birth data, but also all the chart drawings and thousands of biographies.
Astro Wiki

AstroWiki by Astrodienst is a free encyclopedia of astrology. It collects the knowledge of the astrological community and makes it available to everybody. The Wiki`s cadre consists of two astrological lexica.